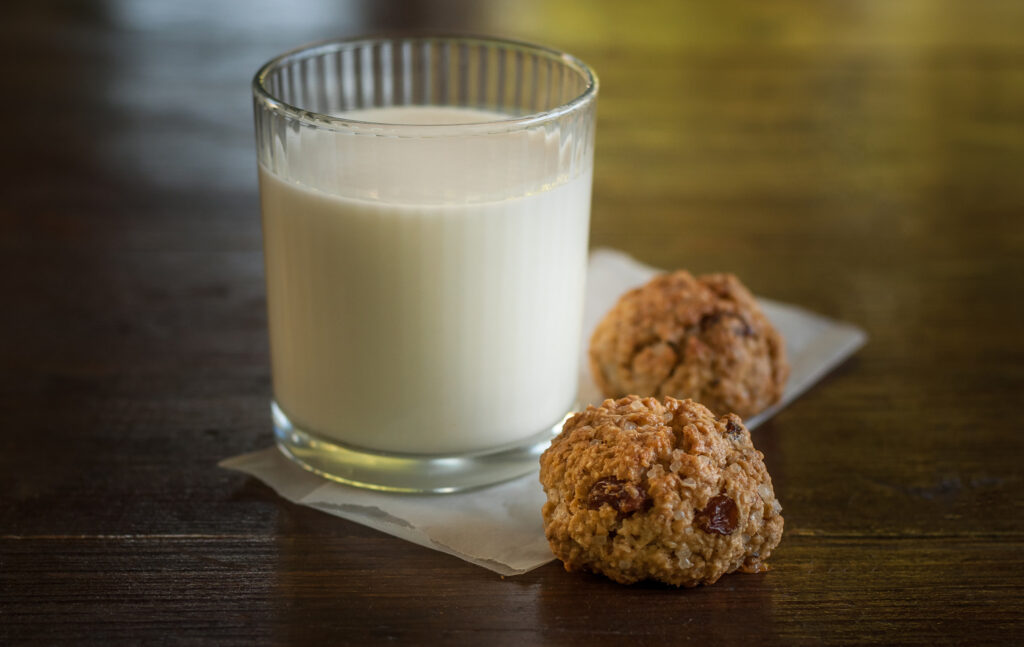 Produced from the mammary glands of a lactating mother, milk is the principal source of nutrition for all infant mammals. It’s packed full of protein, lactose (a natural sugar found in milk), calcium, and a variety of other nutrients, as well as hormones, antibodies and fats that are specific to the animal species that the milk comes from. Though processed forms of milk are often fortified with Vitamin D and other micronutrients, whole milk is a natural source of Vitamin D.

Cow’s milk is the predominant agricultural milk product that humans consume, though depending on the part of the world, goat, sheep, yak and even camel milk can have a place in traditional diets. People, especially of European descent, have been drinking milk since around 5,500 BCE. Milk is also the basis for many other “dairy” food products around the world, such as cheese, yogurt, butter, curd, custard, dulce de leche, kumis, whey, and much more.

Not all researchers and nutritionists agree on the benefits and harmful effects of drinking cow’s milk. Positive opinions say that milk is an amazing source of protein and calcium that helps in bone growth, strength, heart health, cancer prevention and overall physical well-being. Negative opinions of drinking cow’s milk see it as a beverage loaded in saturated fat (whole milk), or an ultra-processed food (skim milk) that disposes of an abundance of nutrients and enzymes found in whole milk. Additionally critics like to point out that no mammal (including humans) has an biologically viable reason to be drinking the hormone-packed milk that was intended for the infants of another mammal. There have even been studies that have linked the frequent consumption of milk in certain individuals to the development of “diseases of civilization,” such as type 2 diabetes

Industry and government policy have also had huge impacts on milk consumption. Flavored milk, for example, which is processed and has many added sugars, finds its way into most school cafeterias in the United States due to certain perverse government policies and food industry marketing campaigns. Unhealthful food in schools has been linked to the rising incidence of type 2 diabetes in children.

There are also varied opinions on whether there is more health benefit in drinking whole milk over processed and/or pasteurized reduced-fat or non-fat milk, and milk from organic and grass-fed dairy cows versus the more ubiquitous factory-farmed dairy cows fed on corn in the United States. Grass-fed cows’ milk tends to be higher in antioxidants, omega 3 fatty acids, plant-based nutrients and B-Vitamins that come from their grass-based diets.

Furthermore, while consumption of whole milk and reduced fat milks have shown mixed results in relation to type 2 diabetes incidence and obesity, fermented milks and dairy products, such as kumis and certain yogurts and cheeses, have been connected to lowering diabetes risk.

The truth about how good an idea it is to drink animal milk likely lies somewhere in between all of these differing opinions and research findings, and depends also on the circumstances of each individual, as people tend to process and synthesize milk within their bodies in different ways.

A look at some of milk’s potential health benefits: https://www.medicalnewstoday.com/articles/273451.php

A history of milk consumption and the first humans able to digest lactase: https://phys.org/news/2009-08-years-central-europe.html

A 2013 Study published in the BMC Nutrition Journal indicated a connection between frequent milk consumption and the triggering of a signaling pathway that may lead to diseases such as diabetes:
https://nutritionj.biomedcentral.com/articles/10.1186/1475-2891-12-103