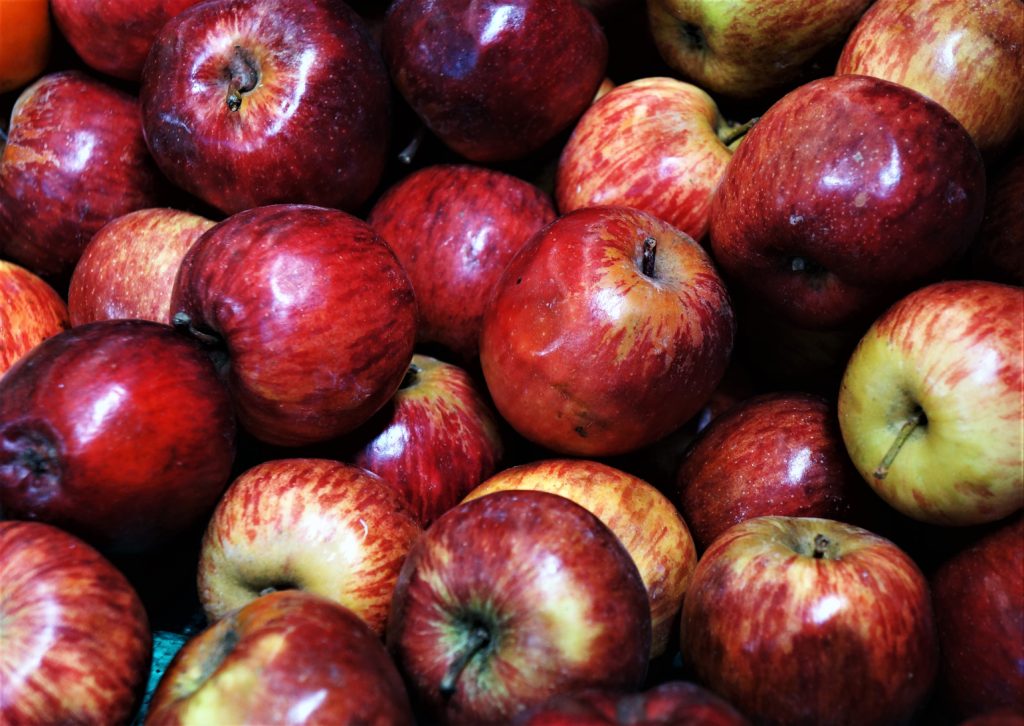 Believed to be one of the first domesticated fruit trees, Malus Domesticus has spread its seeds around the globe via hundreds of different varieties of cultivated apples. Pomology is the name given to the agricultural science of apple growing. In the United States, which is the world’s second biggest producer (after China) apples are the second most consumed whole fruit (after bananas).  More than 60 percent of cultivated apples are eaten as a fresh and nutritious whole food by a range of ages and demographics in the United States.

Differing apple varieties possess a large array of flavor profiles and micro-nutritional characteristics, but when eating any apple whole with the skin, you can be sure to get a solid dose of dietary fiber, vitamin C , B-vitamins, several beneficial minerals such as potassium and phosphorus, and polyphenolic compounds (antioxidants and other phytonutrients). These healthy nutrients in apples have been shown to help prevent the onset of certain chronic diseases, such as type 2 diabetes.

The natural apple harvest at Northern Latitudes, such as in New England, Michigan and Washington State, as well as in Europe and China, occurs from late summer to fall. As with all whole fruits and vegetables, to get optimal nutritional benefit, and support ecological sustainability, it is best to buy produce that is in-season and locally grown, especially when sourced from diverse farms that limit the use of herbicides, pesticides and synthetic fertilizers. Locally-grown, in-season, nutrient-dense whole foods also contain rich flavor profiles, meaning they are often far tastier than their industrial counterparts.

If you are buying apples in the United States in April, you can be sure they have either been transported very long distances (from Chile, for example, as the southern hemisphere apple harvest is the opposite of the northern hemisphere, meaning March – early June approximately), or cultivated in commercial orchards that undoubtedly use a lot of chemicals in their fields and soil. After harvest these commercially grown apples are often stored long periods of time in industrial warehouses (using techniques such as controlled-atmosphere (CA) storage and plant-growth regulators). All of these out-of-season buying options cause damage to the environment and reduce the flavor and nutritional content of the whole food.

For a more comprehensive look at the nutritional content of the Apple, it’s most prominent varieties both in the US and around the world, and it’s fascinating history from the slopes of Central Asia to the Orchards of New England and Washington State, check out http://www.whfoods.com/genpage.php?tname=foodspice&dbid=15

A 2013 comprehensive composite study published in the BMJ (link) (formerly known as the British Medical Journal) that focused on personal fruit consumption of nearly 200,000 adult participants that began the study without Diabetes, Cardiovascular Disease or Cancer, has shown strong evidence that eating Apples frequently helps reduce the onset of type 2 diabetes. http://www.bmj.com/content/347/bmj.f5001

A 2014 study in “Food Chemistry” has shown that certain varieties of apples, such as Granny Smith, help promote “good gut bacteria” and lower risk of developing obesity.
http://www.sciencedirect.com/science/article/pii/S0308814614005251