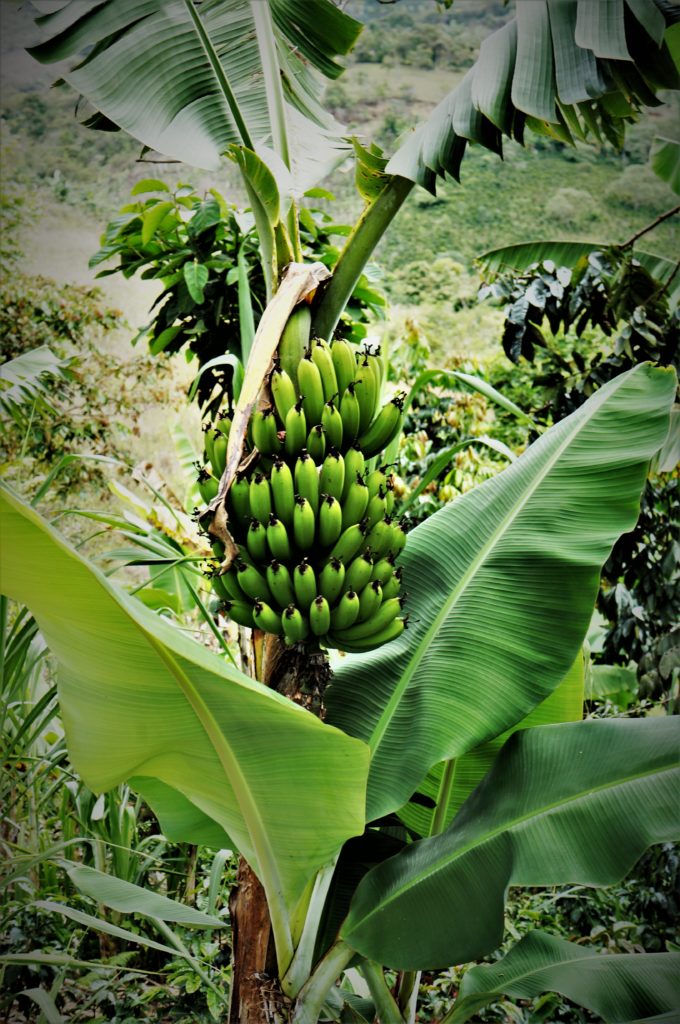 Bananas come from the plant species Musa Acuminata. Acuminata simply means “tapering, or long-pointed”, referring to the banana flower or blossom. “Musa” refers to the last name of the famous Roman emperor Octavius Augustus’s personal physician “Antonius Musa,” and it was Musa who is credited with popularizing the cultivation of bananas sometime around the year 14 B.C.

Rich in potassium, fiber, and various vitamins and minerals, the banana fruit, which is actually a berry, has numerous health benefits. The banana’s high level of pectin, and its ability to act as a prebiotic, makes it a great food for promoting a healthy digestive system. The mineral potassium aids in muscle recovery and repair, as well as cardiovascular support, and recent research has shown promise in the preserving of memory due to an amino acid called tryptophan, or L-Tryptophan. Also, though the verdict is still out on just how much bananas are directly beneficial to those suffering from diabetes, there is strong evidence to suggest that this moderately-low glycemic index whole food (51) aids in the controlling of blood-glucose levels and the prevention of obesity.

An important note when talking about the nutritional value of a banana, is to remember that like many other fruits such as the apple, mango, or the kiwi, the densest location for nutrients is in the peel. The peels of bananas contain a higher amount of soluble and insoluble fiber, as well as an increased density of its many minerals and vitamins. Furthermore, the peel contains an antioxidant called lutein, which is said to protect the eyes from the Sun’s UV radiation. Being that the banana can be found in nearly any supermarket or local produce stand across the United States, maybe next time you go to throw out that peel, remember that there is more you can do with it.

Originally from the Indo-Malaysian region, and reaching to the northern tips of Australia, bananas are now grown pretty much anywhere that has their preferable tropical climate. Climates like those found in Guatemala, Ecuador, Costa Rica, Colombia, and Honduras (the top 5 banana contributors to the U.S. market) give the banana its needed 10-15 months of growth once planted. Thanks to the extensive cultivation in countries around the globe, and the modern technologies involved in the transportation of bananas, this delicious and nutritious whole food can be a daily addition to a well balanced diet all over the world.

Cooking with the banana peel: http://bit.ly/2FqUvna

From the MedicalNewsToday web site this 2017 article details some of the above claims to medical benefits of the banana fruit and peel: http://bit.ly/2y3Mqko

From the American Optometric Association, “Lutein & Zeaxanthin”, and a break down of how and why they help your eyes.: http://bit.ly/2nmgNik

“10 Things You Can Do With Banana Peels” from “Rodales Organic Life”: http://bit.ly/2rPdtBW