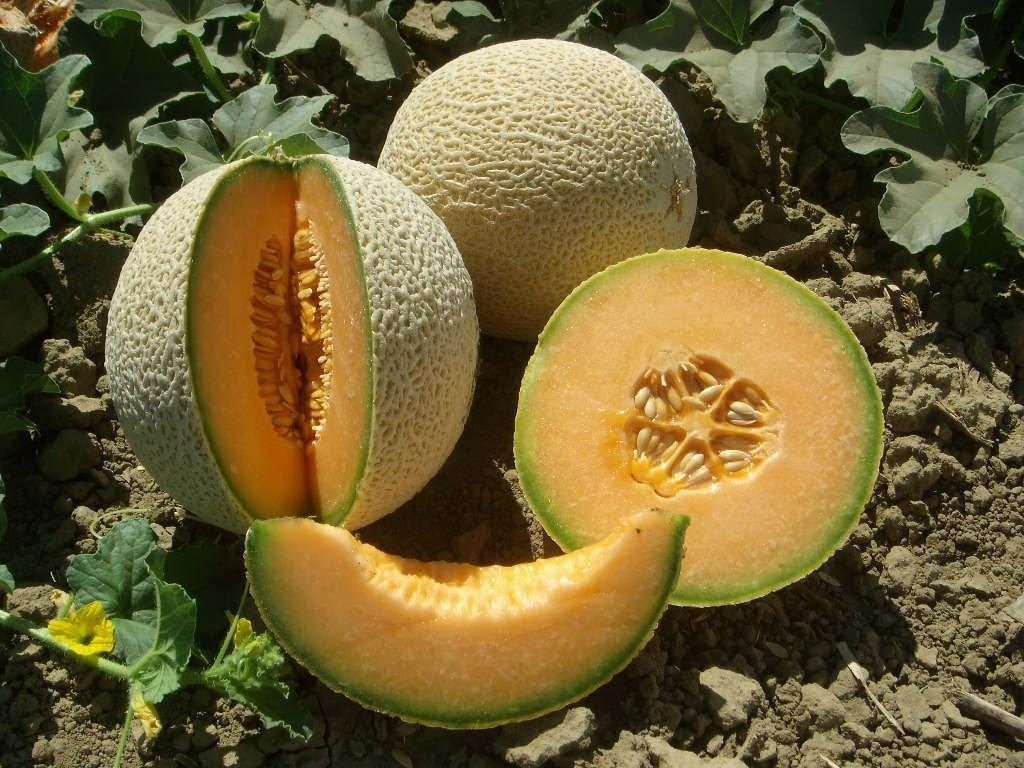 Cantaloupe is a species of musk melon, as are honey dew and casaba melons.  All musk melons are part of the larger botanical family Cucurbitaceae, which includes almost all species of squashes and melons.

Though cantaloupe was not officially called as such until the 17th century, when traders brought the seeds from Armenia to farmers in the commune of Cantalupo, Italy, the fruit itself has been cultivated for thousands of years. Its natural origins are up for debate, with Persia being the most widely held consensus. Northern Africa (where many wild melons and squash grow) and India are also possibilities. In all of these ancient civilizations, cantaloupe was consumed at least 4,000 years ago. The introduction of cantaloupes and other musk melons to the “New World” was, like with many other crops, done through the second voyage of Christopher Columbus in 1493-1494.

Cantaloupe is now grown worldwide. China is by far the largest producer of cantaloupe (and most other melons), followed by Turkey, Iran, Egypt and the United States. The nomenclature of cantaloupe also varies, with South Africans calling it “spanspek” and Australians and New Zealanders calling it “rock melon.” Cantaloupe seeds are also a nutritious snack food that are popular throughout Latin America, the Middle East and Asia.

Cantaloupes are the most popular melon in the United States, and make for a refreshing snack or addition to a healthy fresh fruit salad, smoothie or yogurt. Although the United States is one of the five largest cantaloupe cultivators in the world, (with California producing the majority, followed by Arizona, Georgia, Colorado, Texas and Indiana) due to its popularity nearly 30% of cantaloupe consumed in the United States is imported (mostly from Central American countries like Guatemala and Honduras, but South America and China also contribute).

To find local, fresh and ripe cantaloupe, look for it at your neighborhood farmers market or produce stand in the summertime, otherwise you will likely be buying a fruit that has been transported a long distance from Central or South America.

Eating cantaloupes has a wide range of both immediate and potentially long-term health benefits. Being a strong source of fiber, B vitamins and electrolytes, and having a low glycemic load makes cantaloupe a great food for maintaining energy within cells and controlling blood glucose levels. So cantaloupe helps one to stay hydrated, active and alert.

Cantaloupe has a relatively high glycemic index compared to other fruits at 65, but because it is mostly water, a standard 120 gram serving has very few carbohydrates and calories, which results in a very low glycemic load score of 4. Therefore, eating cantaloupes in their whole food form is very recommendable for both diabetics and those at risk of developing diabetes.

The history of cantaloupes:
http://www.nutritiousfruit.com/cantaloupe.html

For more information on the nutrition profile of cantaloupe and its cultivation:
http://www.whfoods.com/genpage.php?tname=foodspice&dbid=17#nutritionalprofile

More about the health benefits of the cantaloupe: https://www.medicalnewstoday.com/articles/279176.php

A study about the wide ranging benefits of consuming muskmelon:
http://www.irjponline.com/admin/php/uploads/vol-2_issue-8/10.pdf

A study showing how cantaloupes may help reduce oxidative stress in the kidneys of diabetics:
https://content.iospress.com/articles/biofactors/bio00763