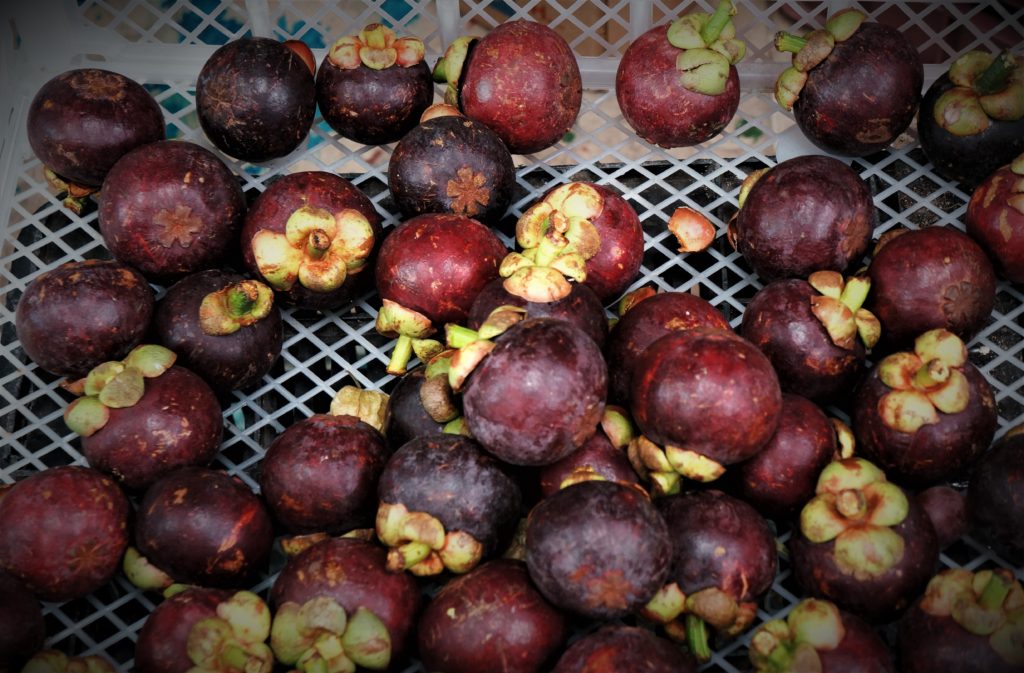 Mangosteen is a small and delicious purple fruit that comes from the tropics of Southeast Asia. It has been used in traditional cuisines and medicine for centuries. Underneath the hard purple rind is a juicy, tangy, sweet and sour white flesh.

Not much modern scientific investigation has been done on the health benefits of mangosteen, but it is known to be a good source of fiber, vitamins A and C, and a range of different minerals such as manganese and calcium.

In traditional medicine in Southeast Asia, especially in Thailand, the rind and flesh of mangosteen have been used to treat numerous ailments, from skin and urinary tract infections, to dysentery and diarrhea. More clinical studies will need to be conducted to confirm the validity of these uses as medicinal remedies. Traditional diets from regions where mangosteen is an important source of nutrition often are also high in other whole fruits and vegetables, as well as fish. When not mixed up with “western diets” full of processed foods, these traditional diets are effective in preventing chronic diseases such as type 2 diabetes.

It is a real challenge to find fresh mangosteen in the United States, and this is due to its delicate nature for transport, difficulty in cultivating outside of specific climates and soils, and some strict regulations that listed Mangosteen as a banned fruit for import into the US by the Food and Drug Administration (FDA) until 2007. The purported reasoning for not allowing fresh mangosteen to be imported was a fear of introducing the Asian fruit fly, a particularly destructive fruit pest.

While that ban has thankfully been lifted, any imported mangosteen must still be irradiated in order to banish any existing Asian fruit flies. This irradiation process, and the increased care needed to ensure the quality of mangosteen during transport, makes the fruit relatively expensive in the rare cases that it is found in the United States. Efforts to cultivate mangosteen in the mainland US so far have been fruitless (no pun intended) but there has been some success in cultivating mangosteen in Puerto Rico. The vast majority of mangosteen is still grown in its endemic region of Southeast and South Asia, but let’s hope this tasty and healthful fruit becomes more available in the near future. If not, perhaps it’s worth the trip!

A nice article from National Geographic explaining some history and the challenges faced in growing Mangosteen:
https://www.nationalgeographic.com/people-and-culture/food/the-plate/2016/05/meet-the-mangosteen/

A list of potential health benefits from consuming Mangosteen:
https://www.organicfacts.net/health-benefits/fruit/mangosteen.html

A 2012 study in the journal Food and Chemical Toxicology looked at possible Anti-Skin-Cancer properties within the rind of Mangosteen:
http://www.sciencedirect.com/science/article/pii/S0278691512004176?via%3Dihub