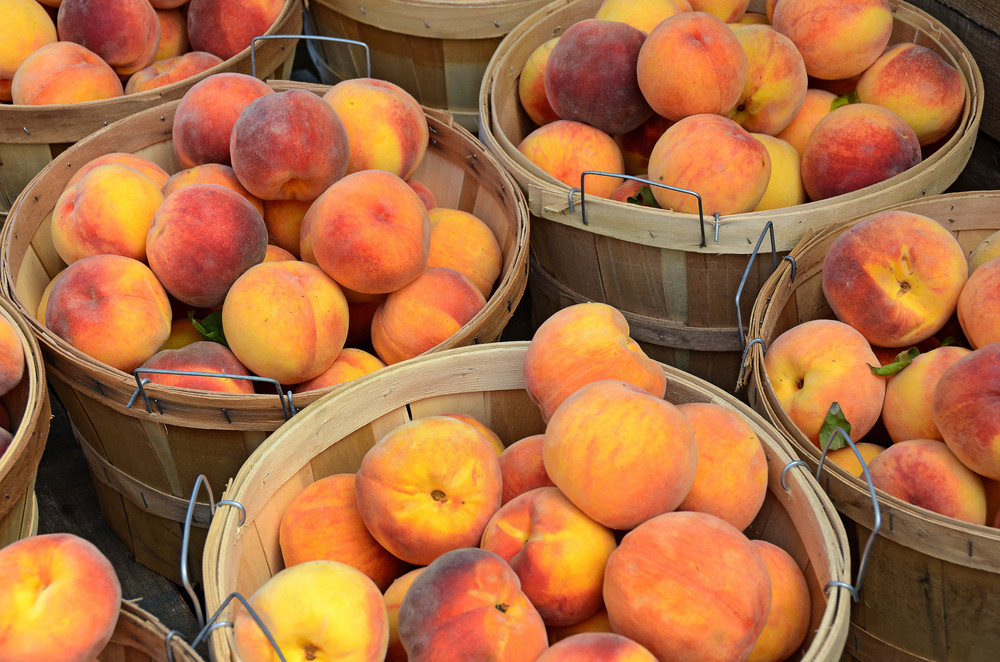 Peaches are believed to be endemic to China, and early cultivation began there more than 4,000 years ago (some genetic analysis has suggested that peaches were cultivated in China nearly 8,000 years ago, but this is still up for debate). Peach tree planting then migrated south and west to Central and South Asia, the Middle East and Europe, along the “silk road” and through trade channels of the Persian empire (the scientific name of the peach, “Prunus Persica,” refers to Persia). Eventually it was the Spanish that brought peaches to the “New World,” where it has become a popular and culturally significant fruit in the United States, as any true “Georgia Peach” will attest to.

Peaches are a stone fruit, as are cherries, plums, mangoes and lychees. Nectarines in fact are a variety of smooth-skinned peach, not a an entirely different fruit species. Peaches are categorized into either “clingstone” or “freestone” where the flesh either clings to the stone or is easily freed from it. The stone, or pit, is poisonous, so don’t go trying to get almonds from peaches; save that for specific varieties of nutrient-rich apricots.

Peaches are in season from May through September in the Northern Hemisphere, including in the United States, Europe and China. China remains by far the largest producer of peaches globally, followed by several European nations and the United States. Peaches are grown in 23 states in the US, but the top four producers are California, (cultivating nearly half the peaches in the US), South Carolina, Georgia and New Jersey. So late-spring to summer-time around the United States, you are likely to find some delicious locally grown peaches at your neighborhood farmers market.

Peaches are not considered a “nutrient-dense” fruit, but they are low in sugar and a solid source of Vitamins A, B and C, and their juicy flesh can be extremely refreshing and hydrating. Peaches, as well as plums,  have also been shown in research to have “bioactive compounds” that may help limit the incidence of obesity, cardiovascular disease and diabetes.

Glycemic Index of Peaches: 42 (this is a mean score, there is some variety between species) = Low

To find out more information about peaches:
https://www.clemson.edu/extension/peach/index.html

For information on peaches and agriculture:
https://www.agmrc.org/commodities-products/fruits/peaches/