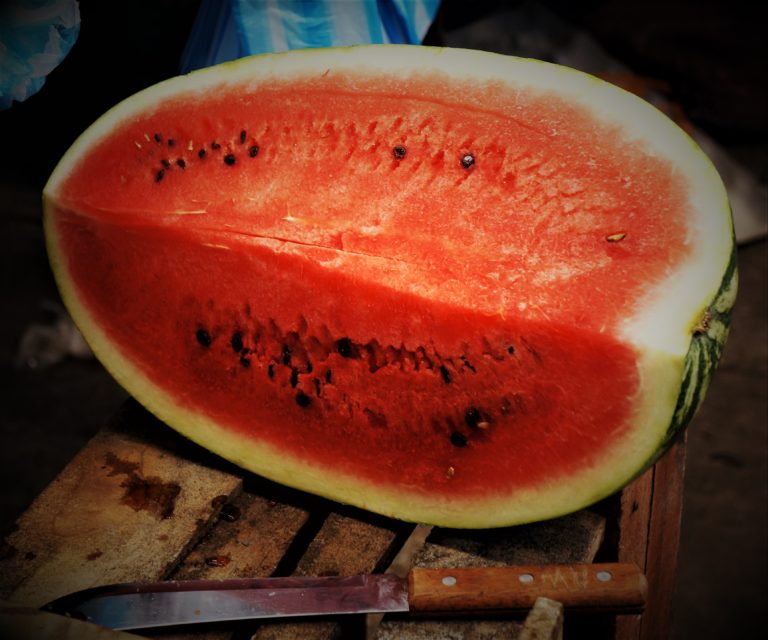 Watermelon, Citrullus lanatus,  is a refreshing and delicious fruit with a fascinating history and healthful nutritional profile.

Originally cultivated in Northern Africa several thousand years ago, and depicted on the walls of the pharaohs tombs of Ancient Egypt, watermelon is likely the descendant of another African melon, the citron melon, which is endemic to Southern Africa.

Modern watermelons now mostly have sweet juicy pink flesh and a smooth dark-green outer rind, though originally they were more sour and had yellow flesh. Interestingly watermelon’s botanical last name “lanatus” means hairy, a mistake in nomenclature that likely referred to the furry outer shell of the citrus melon.

Around 400 B.C.E., watermelons made their way across the Mediterranean sea to southern Europe, where it spread to several different regions, and by the turn of the millennium (at the latest 300 C.E.), likely had acquired its more modern sweet form.

It is an unfortunate part of history that watermelons were introduced by malevolent African slave traders to the Western Hemisphere (as opposed to the more common occurrence of European explorers, such as Christopher Columbus, introducing new crops), who brought the seeds directly from Africa along with their other unconscionable cargo.

Watermelons are now a very popular crop from North to South America, and globally more than 1,000 different varieties are cultivated, with a great range in size, weight and flavor. China now grows the overwhelming majority of watermelon(more than 70% of total global output), with Turkey, Iran and Brazil being distant next-in-lines.

The United States also grows a large amount of watermelon, and unlike many other commercially cultivated fruits that concentrate in one or two states, it is grown in volume in a number of different states. Florida, California, Georgia, Texas and Arizona grow the most watermelon, but more than 40 different states commercially cultivate the fruit. Summer is the best time to find the freshest locally grown watermelon in the United States.

While it might not seem like it, due to it being so juicy and refreshing (watermelon is 92% water), there is actually a lot of valuable nutrition in this tasty whole fruit. Watermelon is a great source of vitamins A and C and is high in antioxidants. One phytonutrient antioxidant compound particularly abundant in watermelon is lycopene, which has been linked in research to several health benefits, such as anti-cancer properties and lowering risk of heart disease.

For more information on the history of watermelon:
https://news.nationalgeographic.com/2015/08/150821-watermelon-fruit-history-agriculture/

The nutritional profile of watermelon:
http://foodstruct.com/food/watermelon

Some research has shown watermelon extract to be a natural treatment for erectile dysfunction:
https://www.researchgate.net/publication/271073831_Effect_of_Watermelon_Citrullus_lanatus_Flesh_Extract_on_Sexual_Behavior_of_Male_Rats

A study on watermelon and lycopene and potential health benefits:
https://www.ncbi.nlm.nih.gov/pmc/articles/PMC4464475/