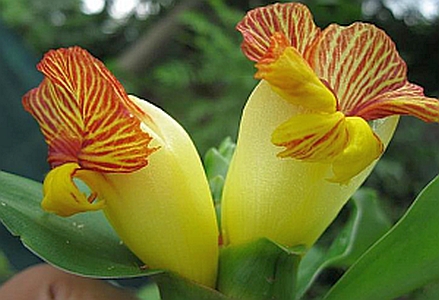 Insulin plant, Step ladder, and Spiral flag are a few of the names that have been given to Costus Igneus Nak, also known by its botanical name as Chamaecostus cuspidatus. A plant native to South and Central America, Costus igneus Nak comes from the plant family Costaceae and is among the genus Costus. Consisting of nearly 150 species, Costus is the largest in the family, and found primarily in tropical climates. Though native to the Americas, this plant can be found growing densely in the gardens of Southern India, where has received the nickname “Insulin Plant.”

There have been a collection of studies published explaining the positive correlations between the leaves of C. igneus and individuals with diabetes. The leaves are rich in protein, iron and a number of antioxidant components such as B-carotene and a-tocopherol. These properties, in combination with its “natural insulin” content (phyto-compounds that simulate the metabolic action of insulin when ingested), aids in C. igneus’ ability to lower blood sugar in individuals with diabetes.

With a healthy stalk standing straight and strong, C. igneus has been given the names, Spiral flag and Step ladder, due to the arrangement of its leaves as they stem from the main stalk in an upwords spiralling manner. Standing between 2-3 feet from the ground, this plant has wide green (ranging from very dark to almost lime colored) leaves that step and spiral up the reddish brown stalk. Among the leaves, which are between 4-8 inches long, one can find vibrant orangish-red flowers that are themselves said to be sweet and nutritious.

Though the primary interest surrounding this plant involves the treatment and management of those suffering with type 1 and type 2 diabetes, there have also been studies focused on the antibacterial, antifungal, and antioxidant properties of the insulin plant as well. With the promise shown in these recent studies, and a truly daunting epidemic of diabetes on our plates, C. igneus appears to be of great benefit to our world.

How to Grow a Costus Igneus Plant”: http://bit.ly/2soCbt7

“Journal of Clinical And Diagnostic Research” concluded that “Regular consumption of insulin plant leaves in conjunction with other modalities of treatment has effectively provided glycaemic control in diabetics; the dose of insulin could be reduced to half.”:
http://bit.ly/2BQQieD