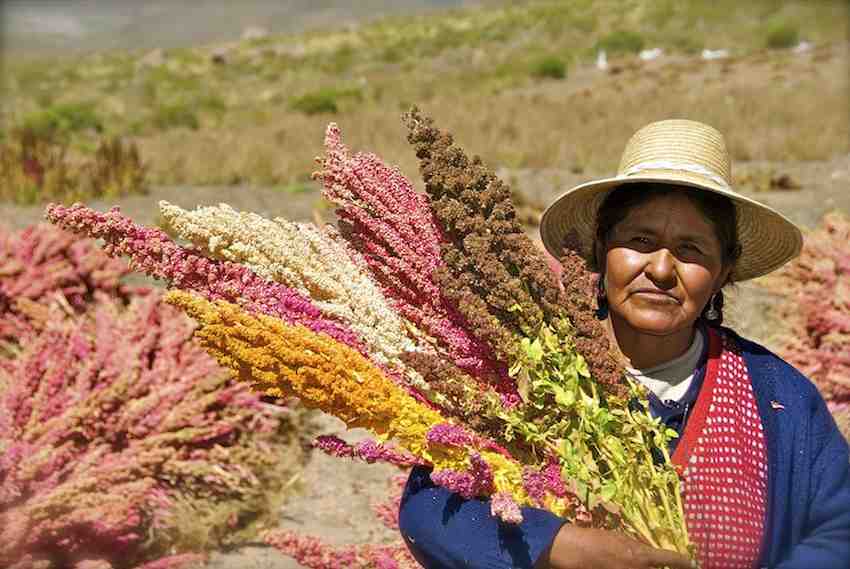 Quinoa is an extremely nutritious whole grain (more correctly, botanically speaking it is a seed), labeled by many a nutritionist as a “superfood.”

Quinoa is endemic to the Andes mountain range of South America, and has been an important crop for indigenous people there for several thousands of years. The Incas cultivated quinoa, and their modern descendants, the Quechua and Aymara cultures, continue to incorporate it as an essential part of their traditional diets, especially in hearty soups that are common in these often colder regions. There are more than 100 varieties of Quinoa, though creamy white, red and black quinoa are the most frequently consumed nowadays.

Quinoa is extremely high in dietary fiber and plant protein. It is also rich in antioxidants, B vitamins, phosphorus, manganese and magnesium. And for those concerned about such a thing, quinoa also happens to be free of gluten.

The health benefits of quinoa appear to be abundant, though much research is left to be done on this recently “discovered” seed by scientists. Quinoa helps with appetite control (high fiber and protein typically translate to greater and longer “satiation”), which can help in preventing obesity and type 2 diabetes and encouraging weight-loss, and has a relatively low (for classified grains) glycemic index score of 53. Research has also shown Quinoa and other Andean “grains” to be useful in managing blood sugar for existing diabetics.

Of course any traditional indigenous person from the Andes would consider researching this obviously nutritious crop, which the Inca called the “Mother Grain,” an unnecessary effort. Many of the health conditions and chronic diseases that quinoa is now believed to help prevent or alleviate did not exist for the indigenous people of the Andes, who consumed traditional diets until recently. Through the arrival to their beautiful lands of “Western diets” full of processed foods and drinks, and lifestyles full of stress and sedentarism, a phenomenon known as the “Nutrition Transition” took and is taking place, and incidence of chronic diseases such as type 2 diabetes are steadily rising.

In the Andes, quinoa is almost always harvested by hand. This is due to the inhomogeneous maturing of the quinoa seeds within each plant, so hand-selecting helps preserve the maximum number of seeds and optimal maturity. With quinoa’s increasing popularity as a “superfood,” it has begun to be harvested more industrially in the United States, where specific species that are more conducive to machine harvesting are the most commonly planted.

A study in the “Journal of Medicinal Food” showed quinoa and other traditional Andean grains to be useful in managing blood sugar and hypertension:
http://quinua.pe/wp-content/uploads/2013/02/Ranilla-et-al.pdf

History and recent trends of Quinoa planting in the United States:
https://www.smithsonianmag.com/arts-culture/quinoa-the-mother-of-grains-1-57670322/