In 1985, just before my 40th birthday, I was diagnosed with Type 2 diabetes. To say that this was a life changing event is an understatement. Though, at the time, the full impact of that diagnosis was still years away.

I didn’t understand how diabetes happened to me — I was fit, exercised and thought that I ate the right foods. I later learned that I was at-risk from birth – a ticking time bomb!  This is because of a family history of diabetes (genetics), as well as weighing over 9 lbs. at birth, which is a risk factor for both baby and mother. I also have come to understand that many of the foods that were marketed to me as being healthy, both by corporations and the government entities that they helped to fund, were far from it. If I had known then what I know now, I would have been much more diligent in modifying my diet and eating more whole and unprocessed foods, to prevent and then better self-manage what has since caused me and my loved ones so much heartache.

My treatment began with diet control.  I was simply told to read nutrition labels and avoid foods that listed sugar as one of the first 3 ingredients – certainly, an over- simplistic approach. I then went into denial about having this disease, typical of many diabetics upon diagnosis. Not surprisingly, two years later, I progressed to requiring oral medication.

Still, I didn’t take my diabetes management seriously enough.  Within ten years of my diagnosis I began to understand and experience the consequences of my poor self-management of the disease.

In the meantime, in 1990, I co-founded Defeat Diabetes Foundation, a nationally registered 501(c)(3) non-profit, with my brother, Jerry, at the time an undiagnosed diabetic. In 1990 there was little reporting about type 2 diabetes, yet the number of people with the disease in the United States alone was a staggering 12 million Americans, and growing exponentially.

In 1995 I decided to do a major awareness event and began training to run a marathon (26.2 miles) each day for eight consecutive days, across the state of Florida. Running was my “exercise of choice” and I had run single marathon distances several times. And, although I was 50 years old and diabetic, I felt that with proper training I could accomplish this feat.

While training, I began losing weight, but attributed it to my ramped up workout schedule. I had lost about 30 pounds when I woke up one day in excruciating pain and my life was changed forever. It was severe diabetic neuropathy.  Coupled with the weight loss I was on a rapid downhill slide – with my diabetes totally out of control.

The severe pain and continued weight loss (ultimately 75-80 pounds) seemed endless. And, although under the care of several doctors and other health professionals, my life was at risk. I was bedridden for two years and there were many days that I thought would be my last. I faced a clear and certain sense of my own mortality.

Then, I started to understand the “bigger” role that I could play in the treatment of my own disease and learned everything I could about diabetes. I worked diligently with a team of dedicated diabetes professionals to understand how food and exercise affected my glucose levels, and formulate an integrated management approach. That and the daily use of insulin injections finally got it under control.

My recovery wasn’t without complications, though. Severe peripheral neuropathy in my feet and legs resulted in constant pain, balance problems and an eventual inability to run. I also continued to suffer from the other neuropathies common to many diabetics:  proximal, truncal and autonomic. Retinopathy also threatened my vision, requiring surgery on both eyes to stave off blindness.

As I began to regain weight and strength, I started training again. Unfortunately the damage done to my nerves had affected my balance, and I found myself falling frequently while running, constantly setting me back in my training regiments. I decided to make the mental and physical shift to walking, and from there I didn’t look back.

Wake up and Walk® Tour 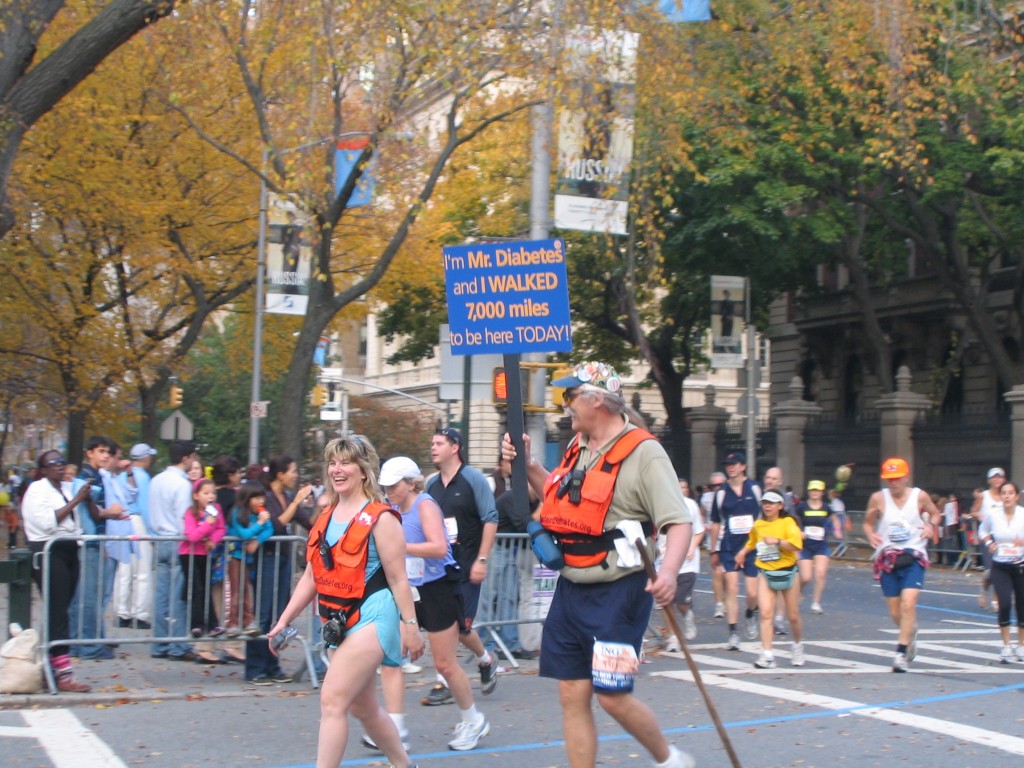 After coming face-to-face with the debilitating consequences of diabetes and nearly losing my life, I decided to undertake the Mr. Diabetes® Wake Up and Walk® Tour, a 10,000+ mile perimeter walk of the United States to, literally, take the message to the streets and raise awareness about diabetes.

My journey began December 1, 2000 and concluded on December 21, 2008. I walked through all of the 34 perimeter states, through big cities like Los Angeles and Boston and towns that barely registered on a map. I crossed hundreds of major rivers and waterways, deserts, coastal rainforests, the continental divide and 4 time zones – twice! I walked through blistering heat, rain, high winds, freezing cold and snow; wearing out 25 pairs of walking shoes and logging a total of 10,030.3 miles.

While on my journey I met with 78,000 individuals, one-on-one, thousands of whom shared their own diabetes concerns and experiences. I lived in their communities for weeks, or months, at a time. Sometimes it was challenging to maintain good diabetes management and glucose control when there were limited healthy choices for restaurants, few grocery stores or produce stands. Often my options were limited to truck stops or convenience stores. Often, communities were lacking appropriate medical professionals or facilities to help treat and manage their disease. Many individuals lacked even the most basic information about ways to reduce their risk of diabetic complications. This instilled in me a profound awareness of how difficult it is for many diabetics to properly manage their condition, and also the risk that the general populace faces in limiting risk of developing this highly preventable disease, with so little whole fresh food and proper medical care available.

I spoke to many thousands of people in groups, at churches and synagogues, schools, senior centers and civic organizations, and I met with hundreds of elected officials and government administrators to discuss ways to create awareness and to help prevent diabetes with low cost programs that foster a healthier community.

I was the subject of almost 1000 media interviews (newsprint, radio, TV and Internet) resulting in outreach to over 70 million Americans. Now, you can scarcely listen to the news without hearing about the issues of diabetes, obesity and nutrition.

I had extensive meetings with dozens of healthcare administrators and diabetes researchers to learn about the latest treatments, tips on self-management and to participate in diabetes education programs as a guest speaker. Many top researchers reported that a cure for diabetes is unlikely in the foreseeable future.  Our best option to quell the Type 2 diabetes epidemic, which represents more than 90% of all cases around the globe, is to contain it through prevention efforts.

So, while there is still plenty of work left to do, it is something I believe we can accomplish if we work together to create awareness and local prevention projects that create healthier communities.